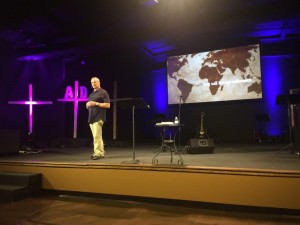 Pastor Rod has been a teacher and coach his entire adult life. He started teaching high school science after graduating from college with a degree in Biology. Being a high school and college athlete himself, Rod coached football, wrestling, and track throughout his teaching career.

Rod came to know Jesus as his personal Lord and Savior in 2001 after nearly destroying his life with alcohol and infidelity. God miraculously restored Rod’s marriage and gave him a new life.

At the age of 45, Rod was now a fully committed follower of Jesus Christ. It didn’t take long for the Lord to begin using Rod’s new found passion for the Bible in conjunction with his teaching gifts.

In 2002, only a year after coming to know Christ, Rod began to lead his first Bible study. He has been teaching and leading study groups/classes ever since. His desire to become a better Bible study teacher led him back to school, this time as a student.

So God blessed the seventh day and made it holy, because on it God rested from all his work that he had done in creation.
Genesis 2:3